← more from
SLUG WIFE
Get fresh music recommendations delivered to your inbox every Friday.
We've updated our Terms of Use. You can review the changes here. 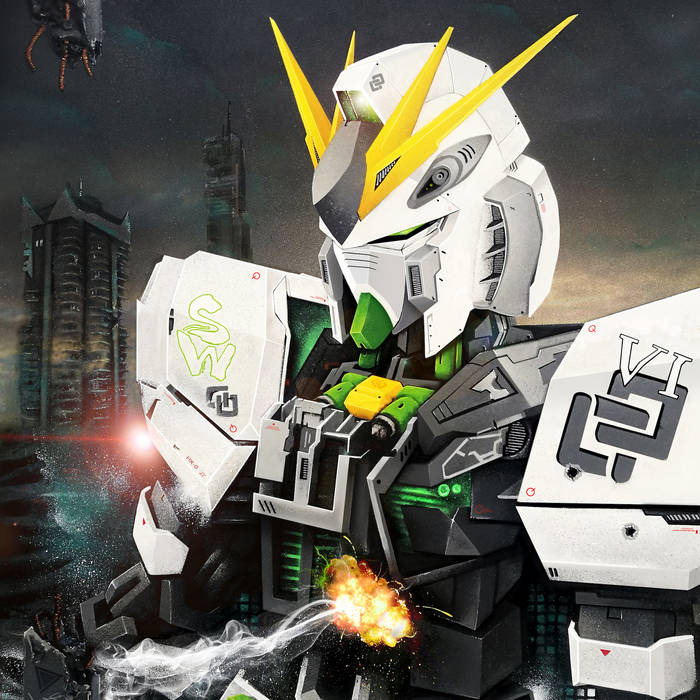 Enigma Reso is an absolute mad man. His production skills are always on point!
more...

Slithering her way down a maze of barely-lit, steel corridors, the pilot ran through her training in an attempt to not miss out a critical step. Powering up these new machines was a 25-stage process—one misstep and you’re back to square one looking like a complete rookie. Today, she would be showing off the Slime Militia’s newest tech to a very important person; someone who, she was told, must be absolutely impressed by the end of the demonstration. Her commanding officer had made this clear to her in no uncertain terms. She was pretty sure that if she messed this up the rest of her career would be in a windowless room, switching records from one format to another.

After what felt like the hundredth corner, she emerged in to a vast hangar lined with gantries and strip lights. Either ends featured vast pneumatic doors spanning the walls in their entirety, both of which were currently closed. In the centre was a small cluster of GasPods dressed in well pressed military uniform, clusters of medals flowing from their shoulders. As she got closer she could see they were grouped around someone she hadn’t seen before. He was dressed in a suit that struck her as old, but well looked after. They noticed the pilot arriving and the Colonel gestured towards her, raising his voice and saying, “Dr. Zee, this is Lieutenant Hopps. She’ll be the pilot for our field test today.”

The civilian slug looked over his spectacles.

“I hope you realise,” he said, “that whilst this is a military operation, it represents a serious investment from Pondscum Slimeatics. I hope your pilot has been sufficiently vetted and trained.”

The surrounding uniformed GasPods rustled and slopped, betraying a hint of awkwardness.

“Absolutely,” said the General. “The Lieutenant is our best candidate. Shall we proceed?”

Hopps “marched” her way over towards one of the giant steel doors, and a distant mechanical rumble filled the hangar as a gap formed in front of her, gradually expanding. Lights flickered on on the other side and she could make out the huge resting form of the brand new weapon. Nobody really understood the impact of a piece of military machinery so destructive and so focussed. They did know, however, that it would give them the upper hand, and that was enough for it to be green-lit from concept to completion. She reached a small lift underneath the machine, only large enough for a singular GasPod, and was transported into a dark cockpit which immediately flashed to life with a myriad of AR displays and instruments. She buckled herself into the seat and began the complex power-on and arming procedure. The machine shuddered and rose to its full height, big enough to dwarf the municipal tower blocks that litter the planet’s surface.

She breathed a sigh of relief and began to step forward; the giant contraption an extrapolation of her physical form. It had taken weeks for her to get used to balancing on two legs, but once she had managed to walk and then run she could see the advantages. Once she had passed through the opened gateway to the main hangar, she stopped and looked down at the now minuscule shapes that made up the waiting delegation. Focussing her optical sensors, she could view them at such a magnification that the strands of hair in the Colonel’s moustache filled her vision. She scanned around the group to gauge their reaction, and found herself pausing over the civilian. Dr. Zee had a contorted expression; his face crawling with barely suppressed excitement. It was seriously unnerving in a way she couldn’t quite place. She flicked on the enhanced audio and heard him mutter between ragged breaths, “…I can’t wait until it meets the other one…”

The Lieutenant’s brain when into panic mode.

What other one could he be talking about? Another machine? Nothing in her training had prepared her for this eventuality, and she had the sneaking feeling none of her superiors knew. Everything related to this project was classified anyway. The second pair of doors slowly rumbled open. The order came over the radio to commence the field test. Her stomach was tied in knots, but she had her orders. She sprinted out of the hangar and launched into the sky.

Bandcamp Daily  your guide to the world of Bandcamp